This case demonstrates the potential for a combination of the mirror image ScoliBrace and ScoliBalance rehabilitation program to improve the cosmetic look of the body, the spinal alignment and degree of curve, and the pain associated with the scoliosis. Although relatively mature this patient was able to achieve 15 degrees of correction of her curve. 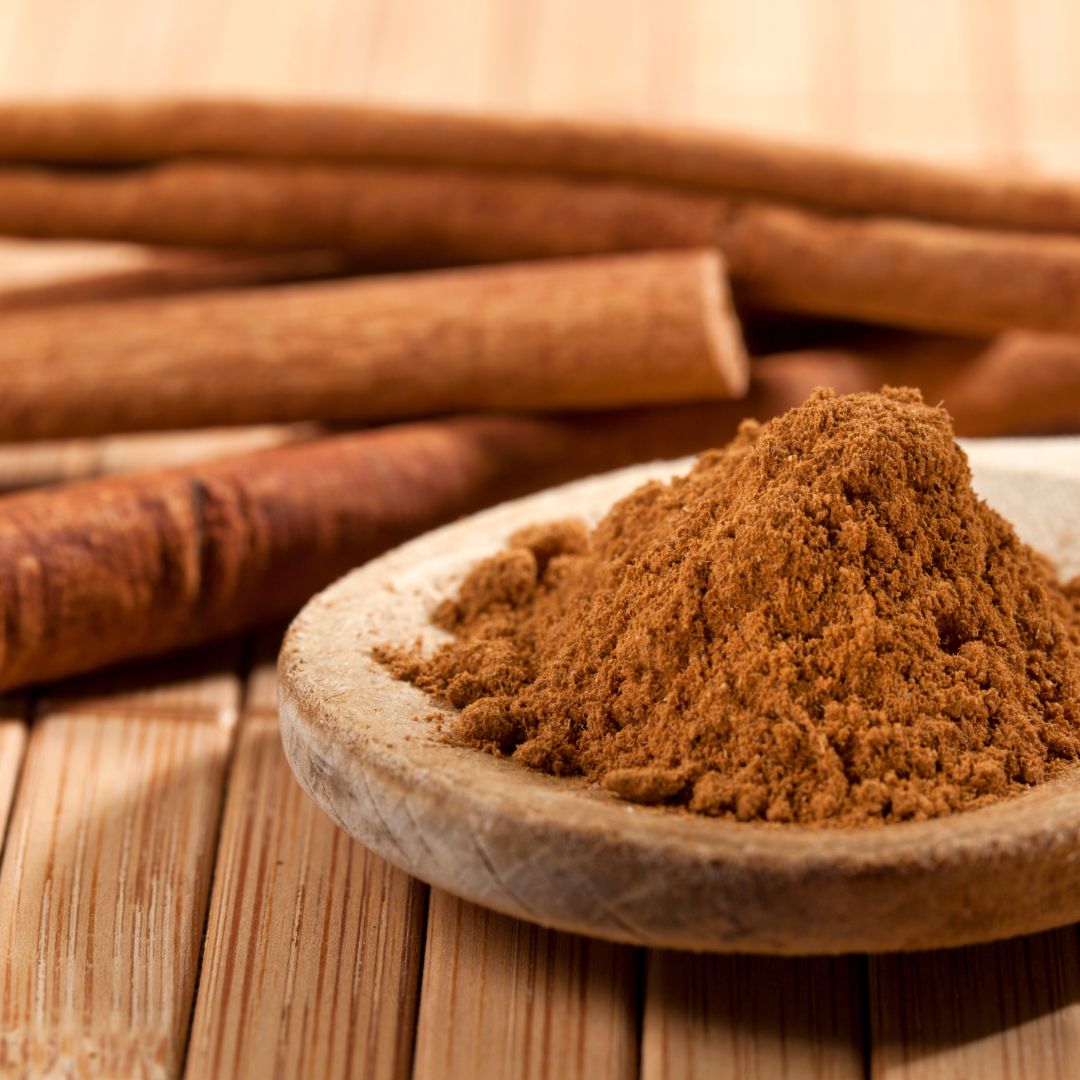 ​Although this may not be achievable in every case it shows that in cases where the patient is flexible and there is an aspect of the scoliosis that is not fixed it is possible to make correction even after growth has finished. Continuation of the ScoliBalance exercises may be required to maintain the correction.

As can be seen from the photos, a cosmetic improvement in the body was seen within the first 3 months.
This improvement was maintained at 12 and 18 months. At the 3 month mark an in-brace x-ray was taken showing very good correction of the curve.
The thoracic curve reduced from 44 to 20 degrees and the lumbar curve reduced from 43 to 14 degrees (in the brace).

At the 8 month mark an out-of-brace x-ray was taken at an independent radiology clinic, with the patient standing in her relaxed normal posture. This showed a significant improvement in the scoliosis curves.  The lumbar curve was corrected by a staggering 28 degrees! The thoracic spine curve was corrected by 9°.The patient has continued with compliant treatment, and postural photographs at the 12 and 18 month mark show stability of the result. She is continuing with treatment.
​Discussion

This case demonstrates the powerful super-corrective effect of the ScoliBrace and how the addition of the ScoliRoll can work with the corrective approach of the ScoliBrace. This combination of treatment has been able to improve the cosmetic look of the body, the spinal alignment and the degree of curve. Although still immature and undergoing treatment, this case represents a positive initial result that will likely result in this patient avoiding spinal fusion surgery in the future.

Male patient aged 14 years with a right thoracic curve measured at 49 degrees
​The patient and his family are very committed to his treatment and to helping him succeed. The patient is a very motivated young man and his hard work is definitely paying off with the results he has achieved so far. 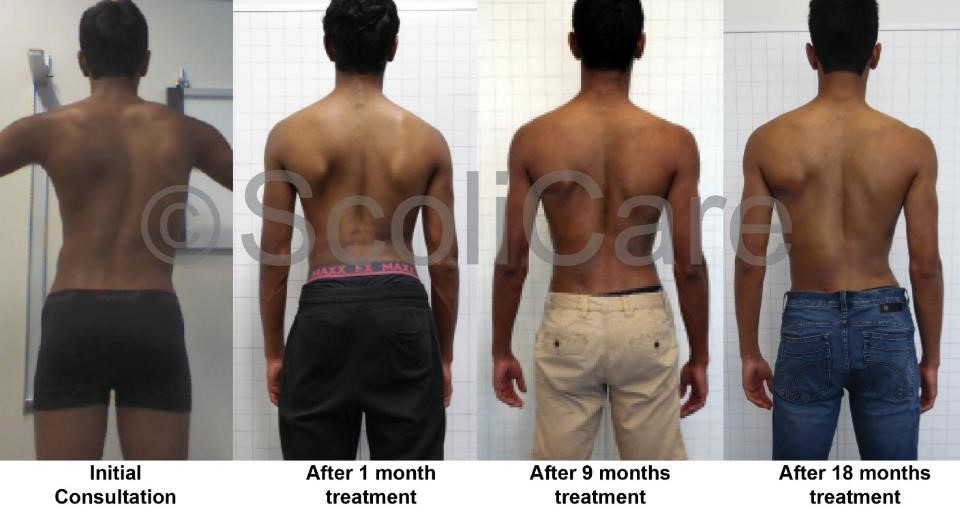 In this case it was possible to reduce a large curve that was at a surgical level to a moderate curve no longer at risk of needing surgery. Choosing the right treatment to achieve the goals of cosmetic improvement, curve reduction, and pain relief was successful in this case.
The patient was also able to continue competing at an elite level without compromising his ability


NB: Results vary from case to case. Our commitment is to recommend the most appropriate treatment based on the patient’s type and severity of scoliosis.
© ScoliCare 2015
​This case study is provided courtesy of ScoliCare (www.scolicare.com.au)

Patient presented to the Sydney Scoliosis Clinic, aged 7 years at the time on initial examination. This patient had been recommended and fitted with a traditional 3 point pressure hospital made TLSO.
This brace had achieved minimal in-brace correction – the thoracic curve had been reduced from 32 to 21 degrees. The lumbar curve remained the same in brace.

The patient was switched to the super corrective ScoliBrace. New in-brace x-rays show a dramatically better in-brace correction in the ScoliBrace compared to the hospital TLSO.

ScoliBrace is not a traditional 3 point pressure brace. Instead the brace uses a concept of spinal repositioning by over correcting the body posture and using specific 3D moulding to main the correction in the brace. As highlighted in Stokes review on bracing published in Bone Joint Journal. 2013 titled “The current status of bracing for patients with adolescent idiopathic scoliosis”. Stokes states that; “In conclusion…The Hueter–Volkmann principle holds true for bracing in AIS. If a brace does not correct a curve on application, then either the brace has not been designed, manufactured or fitted correctly, or the curve cannot be braced.”

This case demonstrates a clear difference in corrective effect on the same patient by two different braces.  One of the braces had poor correction and most likely would have not stopped progression of the curve. The other had good correction and has a much high chance of stopping progression or improving the curve.
Conclusion

Not all braces are the same. In this case the ScoliBrace clearly showed a superior in-brace correction to the hospital manufactured brace for the same patient. Although this case has not reached its end point and treatment is ongoing, the initial requirements needed for a ScoliBrace to demonstrate its potential usefulness in the treatment of idiopathic scoliosis is demonstrated in this case.


NB: Results vary from case to case. Our commitment is to recommend the most appropriate treatment based on the patient’s type and severity of scoliosis.
© ScoliCare 2014
​This case study is provided courtesy of Scolicare (www.scolicare.com.au)

Patient presented to the Melbourne Scoliosis Clinic aged 16 years at the time of initial examination complaining of a sore back and poor posture. He was diagnosed with a Scheuermann’s kyphosis measuring 61 degrees. 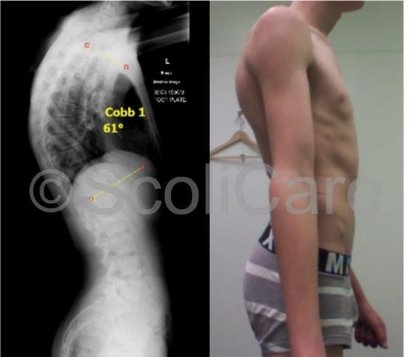 A specialised brace for kyphosis treatment called a KyphoBrace was recommend to help reduce and stabilize the kyphosis. It was recommended that the KyphoBrace be worn for 20 hours per day for a 24 month period. 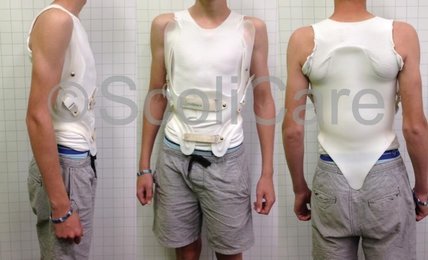 In the brace you can see that the patient posture is greatly improved. The brace is also very low profile and with clothes over the top is nearly impossible to see.
At the 3 month mark, an in-brace x-ray was taken. The in-brace kyphosis had reduced to 47 degrees.
After 4 months of treatment, an out of brace x-ray was taken. The Kyphosis had reduced from 61 to 48 degrees.
​
​Discussion

Scheuermann’s kyphosis is a progressive spinal deformity that can worsen with growth and if it gets too severe requires surgery. Bracing is recommended when a Kyphosis progresses beyond 60 degrees as there is a tendency for the curve to continue to worsen even after growth has finished. Surgery is often recommended if the curve is greater than 70 degrees.

Old fashion braces, such as the Milwaukee brace, used to be the only way to non-surgically treat kyphosis. The development of the KyphoBrace however, means there is now an effective bracing treatment for kyphosis in teens and young adults that can not only hold but also reduce the kyphosis and is low profile and hardly visible under clothing.

This case demonstrates that that KyphoBrace is an effective treatment for Scheuermann’s kyphosis. Both improvements in the patient’s postural appearance, and the degree of the curve on x-ray are demonstrated. 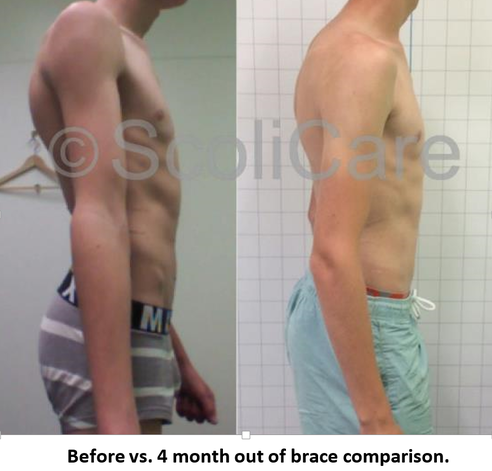 ​NB: Results vary from case to case. Our commitment is to recommend the most appropriate treatment based on the patient’s type and severity of scoliosis.
© ScoliCare and Melbourne Scoliosis Clinic 2015
This case study is provided courtesy of Scolicare (www.scolicare.com.au)
© Copyright 2021. Spinecare Chiropractic Sdn. Bhd.